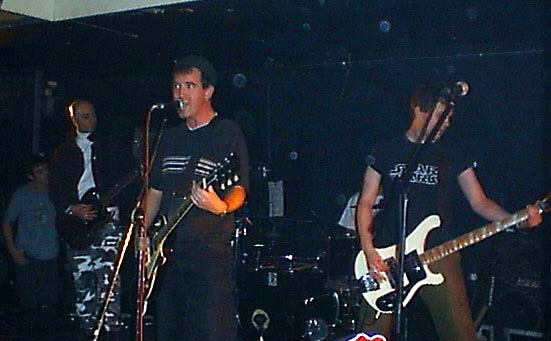 Back in January 1999, Abdoujaparov came to Essex (for the first of many happy visits to our wonderful county) and played the Y Club in Chelmsford, only their second ever show at that time. I went down there early to chat to him for a radio interview, which went out on my radio show Brentwood’s Only Alternative on Phoenix FM’s 2nd short-term trial broadcast in March 1999. Thanks to the wonder of typing, you can now read it too …

How did you come up with that name?

It’s the name of my favourite cyclist. I’m a real keen cycling fan and he’s, well he’s not a professional cyclist any more because he got thrown out for taking too many drugs a couple of years ago. He was like a kind of an anti-hero, he was pretty dangerous – always knocking other riders off. He was a good sort, I liked him, very punk rock!

Is that reflecting the music you’re playing now, as the last couple of Carter USM albums were moving towards a more acoustic and mellow direction?

Yes, it was kind of like that, although there are a couple of very mellow songs with Abdoujaparov as well. But the idea of the band is that it was going to be very raucous and punk rock and we don’t care kind of thing.

You’ve only been together for a few months but the first single is already out – Punk Confetti, which came out on mail order only. What was the idea behind that?

I actually put it out through the internet using a shareware idea – people sell a lot of computer programs on a try before you buy basis. I thought that I could adapt this to get enough money together to press the CD by getting people to download the files from the internet, and if they liked them they could send me a cheque for three quid. When I got enough three quids, I pressed it, so it was kind of like a payment in advance but people had it in the meantime on their computers and they get the real physical thing afterwards.

Any idea how many people downloaded the track from your website?

It was in the thousands. I put the files on line towards the end of November (1998) and I had enough money just before Christmas to get them pressed.

So that was a fairly good take up considering most people are used to taking things off the internet for free?

Yeah, I was really heartened by it and I’m going to do the next single that way as well.

You had your first gig at the Water Rats in November, how did that go?

It was great, it was a real good thing for me as it was the longest I had been without playing live since I was 16. The last Carter gig was 18 months before that. It was also the first time I got up and was actually singing as well instead of just playing guitar. It was great, I really enjoyed it – I was quite nervous before I went on but it went really well and the crowd seemed to like it as well.

How do you feel about playing venues like the Water Rats and the Y Club again?

Even when we had a no 1 album in the UK we were still going to America and playing clubs of this size so we’ve been doing this all the while. Mind you it takes as long to get to Chelmsford from South London as it does to get to Paris nowadays. I think this band for me is like a fresh start, if it was Carter I would think, oh shit, we’ve really gone downhill. But that was one of the reasons that we stopped Carter, because it wasn’t any fun any more. With this band, it’s a new thing, and I really enjoy playing clubs like this.

Talking of Carter, what is Jimbob up to now?

Jim’s recorded his first solo album. He’s got this new thing called Jim’s Super Stereoworld and he is talking to three or four record labels at the moment. He was going to have a record out on Cooking Vinyl, which was Carter’s previous label, but that fell through so he’s talking to other people. He’s quite hopeful to get something out in the Spring.

The only thing I like at the moment is Fatboy Slim! Guitar based music is really bland and boring at the moment and I don’t really get off on it at all. I’ve been going back to my old record collection – I’ve got a lot of Leonard Cohen LPs … (laughs)

What else is planned for the future?

I’m going to release the next single on the internet in mid February and if I go by how the other one went, I will have the physical CD sometime in March. In March we’re going to tour Australia – we decided to do the Australia thing very early on in the career of this band. And of course their Grand Prix’s on so can’t ask for more really!