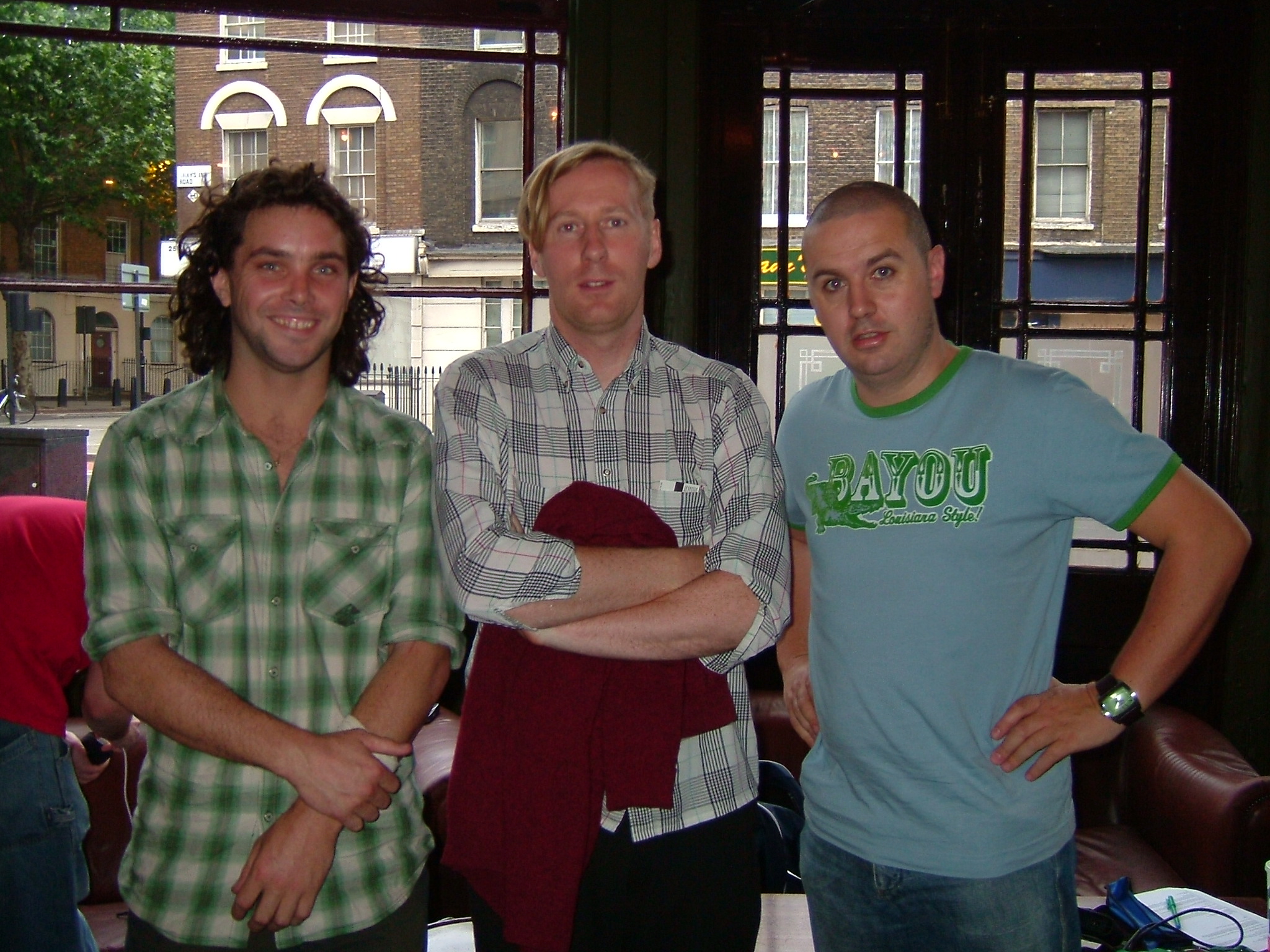 I didn’t take a photo of the band in 1996 because, well it was the 90s and no one took cameras anywhere except on holiday, did they? This is the band at the Water Rats in June 2005 – Kevin Pedreschi now in the line-up, having replaced Niall Linehan

Back in 1996 I was a fledging presenter on little known and now defunct community radio station in Billericay, Mayflower FM. The best thing about this station was that we broadcast from an old BBC Outside Broadcast van in the car park of the White Hart pub in the High Street, and all you had to do was mention them on air and they’d be knocking on the door with another pint. It’s a wonder we got any radio stuff done at all.

On 28 June that year I went out to do my first interview with the suddenly-reappeared Frank and Walters, who were playing their first gig that night at the Water Rats in Kings Cross, London. Our station had no recording equipment (that’s right, our station had no recording equipment) and I had to borrow an extremely cheap and old voice recorder from Basildon crown court (don’t ask, please don’t ask!) This caused great amusement with the boys from the band as we piled into the back of the van, with Paul telling me that this was state of the art equipment and the BBC use them all the time.

Fast forward to whatever year it is now (2005 when I wrote this) and I’ve just found the tape in a big box marked “things to do”, in the kind of handwriting I might have used in the mid 90s. It’s not really good enough quality to put up on line, so I’ve done the next best thing, and transcribed it.

You will notice this is my first interview, from the extremely rubbish questions I asked them. My second interview with them took place at the same place, almost exactly nine years to do the day. Ashley said, “yes I think I remember the first interview, were you wearing a blue shirt?”

Me: You’ve been going for quite a while now, you came onto the music scene around about 1990/1991, how did the idea for the Frank and Walters come about in the first place?

Paul: The name of the band, is it?

Me: Well, yeah, the name of the band, and how you got together?

Paul: Well my brother, he’s the guitarist, and Ashley, he just lives up the road, we just like, I remember I bought a bass there once, my first bass, and they bought a guitar, and Ashley brought drums, and we just formed a band, that was it like.

Ashley: We were just bored, and just hanging around, you know.

Me: The actual name of The Frank and Walters, that came after a couple of local characters, didn’t it?

Niall: Yeah, these two guys that we grew up with, they’re older than us, one was called Frank, and one was called Walter, they were a bit off the wall. And then we just started, you know, if we saw anyone acting strange we would say, “Oh he’s a Frank and Walter”, the name came off of that.

Me: Around about that time in the early 90s, you came around at the same time as the Sultans of Ping, and people started talking about a Cork scene coming up, did the music scene in Cork inspire you to play, or was it more out of boredom and you decided to do something about it?

Ashley: When we started, we weren’t inspired by any Cork music scene, you know, there was no scene, no similarities between our music and the Sultans of Ping, you know what I mean?

Me: So it was just a coincidence that it all seemed to come around together then?

Me: So it didn’t get any better as time went on then? It didn’t inspire other people in the town to …

Niall: There’s thousand of young bands trying to break through, like, being in Cork was no different.

Me: This is probably the most-asked question that you’re getting at the moment, but where have you been for the last three years?

Paul: It is, yeah. It was like, when we got here three years ago, we got kind of burned out from too much gigs, and for a while we almost had a fear of music, because we associated music with stress, because we had a balance diet in our minds. When we went back to Cork we were even afraid to write songs, the whole thing was associated with stress and we stopped for a while. When we started playing again we were rejuvenated again.

Me: So you feel that the new stuff coming out at the moment is all the more better for you having had a break?

Paul: It definitely is, like we had a fear of music, but we still love music, you know what I mean? We always had a love/hate relationship with music. I love writing music and songs because I find it therapeutic, but if you do too much of it you become stressed out or whatever, but if you don’t do anything then you miss out on the therapeutic factor, getting things off your mind and trying to come to terms with something that’s happening – when you’re moved by something, you can channel it into your music.

Me: Does it feel good being back on the road after all this time?

Paul: It did actually, it felt brilliant. We’re kind of surprised, we thought it would be all hectic again or whatever, but this time we’re just more prepared for it, you know what I mean? We’re a bit more easy going than we used to be. We’re kind of laid back and just take things in our stride rather than just worrying about things. We’re not as nervous as we used to be, going up on stage or anything.

Me: What kind of bands have been around in the meantime that might have influenced the stuff you’re doing now? Or maybe they haven’t, but you’ve enjoyed them anyway?

Niall: In the meantime? I don’t know if we’ve been influenced by them but I do like some of the modern bands, I like the Cardigans, the Wannadies, and even some of the Britpop music is fairly good, you know what I mean? I think Blur and Oasis are very good, and Supergrass, and Pulp, and a whole lot, I think they’re very good, like.

Me: It’s more the melodic kind of stuff?

Niall: It’s more like what we were aiming for ourselves, you know what I mean? Melodic kind of pop music.

Ashley: A few years ago, we were releasing records and the top 40 would be jammed full of dance stuff, dance jazzed-up cover versions. It’s amazing that you can look at the top 40 now and half of it would be proper melodic songs. That’s good for a band like us because that’s where we’re coming from.

Me: How do you see the future shaping up? Up to the end of this year can we expect more touring, or plans to start work on a new album, a third one?

Paul: We actually have. We’ve already written songs for our third album. This album that we have was finished recording about a year ago, believe it or not, but we had to wait around for a while to get it mixed, there was a bit of confusion, but the thing is that in the meantime we wrote a lot of new songs, we’ve got a lot of songs for a third album and we’ve got millions of ideas.

Me: Thanks very much for the chat, Paul, Ashley and Niall – hope it goes well for you.