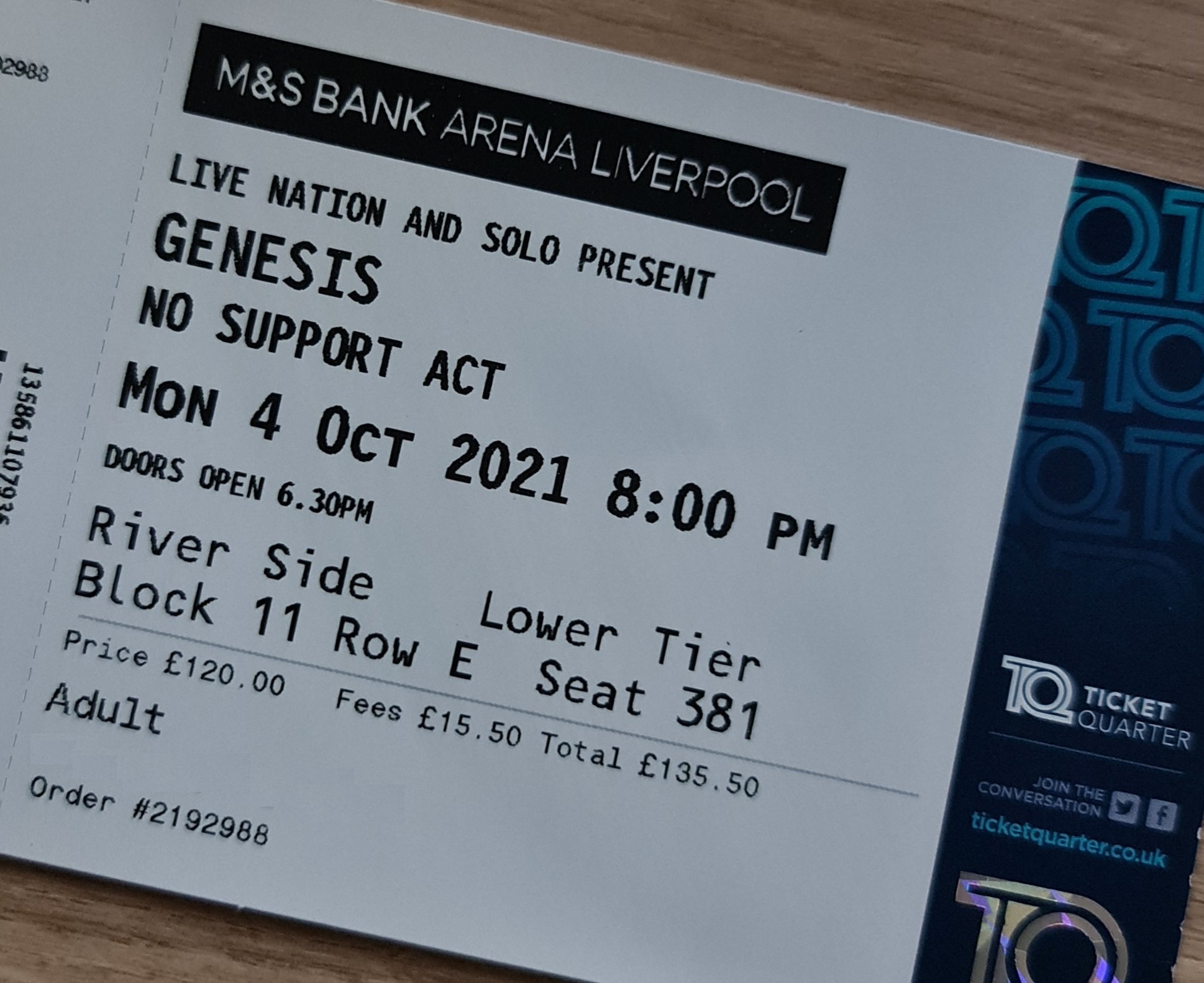 This wasn’t my ticket – someone posted it online. They had a real ticket, I had a stupid e-ticket. And my ones were £178.50 each!

Among all the cool and not-so-cool indie bands I listen to on a regular basis, I always go back to my first love.

As a teenager I was familiar with Genesis – mainly the self-titled 1983 album which I had bought and played a lot, but I thought no more of it than it being an interesting pop album.

A couple of years later I found myself sitting round my friend Guy’s house in Romford while he played Stagnation from Genesis’s 1970 album Trespass, marvelling at the changes in pitch, tempo and passion – pointing out this was written and recorded by a bunch of 19/20 year olds.

(Guy was also a massive Level 42 fan and thankfully I didn’t take his advice on *all* musical matters).

I was aged 18, still in the sixth form and used my part-time job money to buy every Genesis album available, in chronological order. Actually, I didn’t buy the very first – I started with Trespass. I’d have probably given up if I heard much of From Genesis To Revelation, although that has its merits …

My first two gigs were Peter Gabriel at Earl’s Court and Genesis at Wembley Stadium, both in 1987, and that set me on a few years of buying up a lot of prog and, thanks to Gabriel’s solo work, art rock too.

I stopped listening to classic and prog rock in my early 20s when I started to discover Carter USM, the Frank and Walters and the Sultans of Ping, but I always dipped into listening to old Genesis stuff. So when Genesis announced what was very likely to be their final tour, I decided I wasn’t going to miss out on it.

The idea of going up to Liverpool was a novel one – my son is also a Genesis fan (one bit of parenting I got right) and was living in Lancaster when I ordered us the tickets in March 2020. Then of course Covid happened, and he moved back down south and now lives and works here. So it was one long road trip for both of us, but I was glad to be able to see Liverpool for the first time in a non-football setting.

Luckily, with about two weeks before the rescheduled gig, we managed to find ourselves a hotel immediately opposite, and I mean totally and utterly opposite the venue. This photo was taken from the hotel steps. 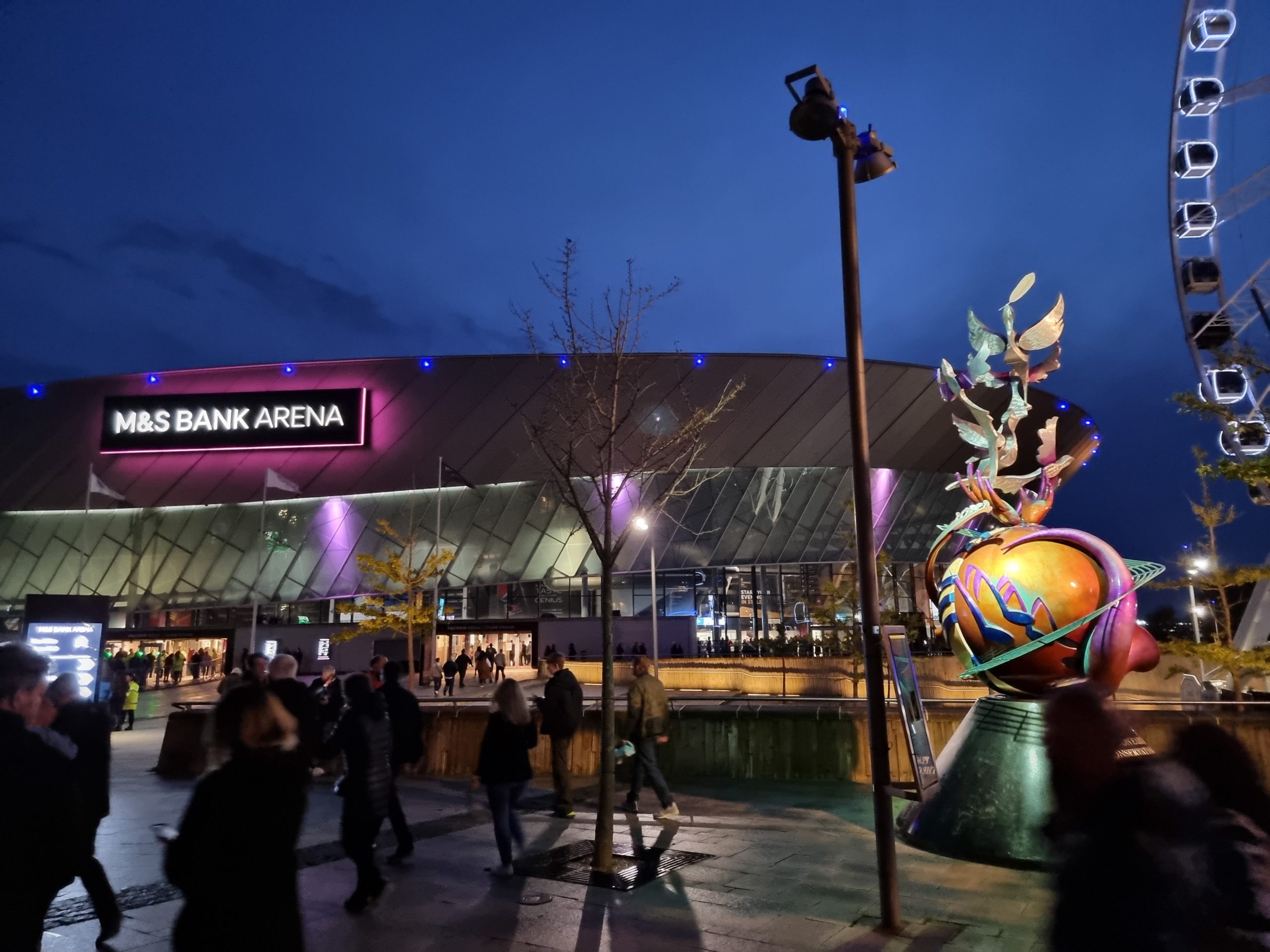 It was a first arena gig for me for some time – and the busiest place I’d been to by far since lockdown lifted. 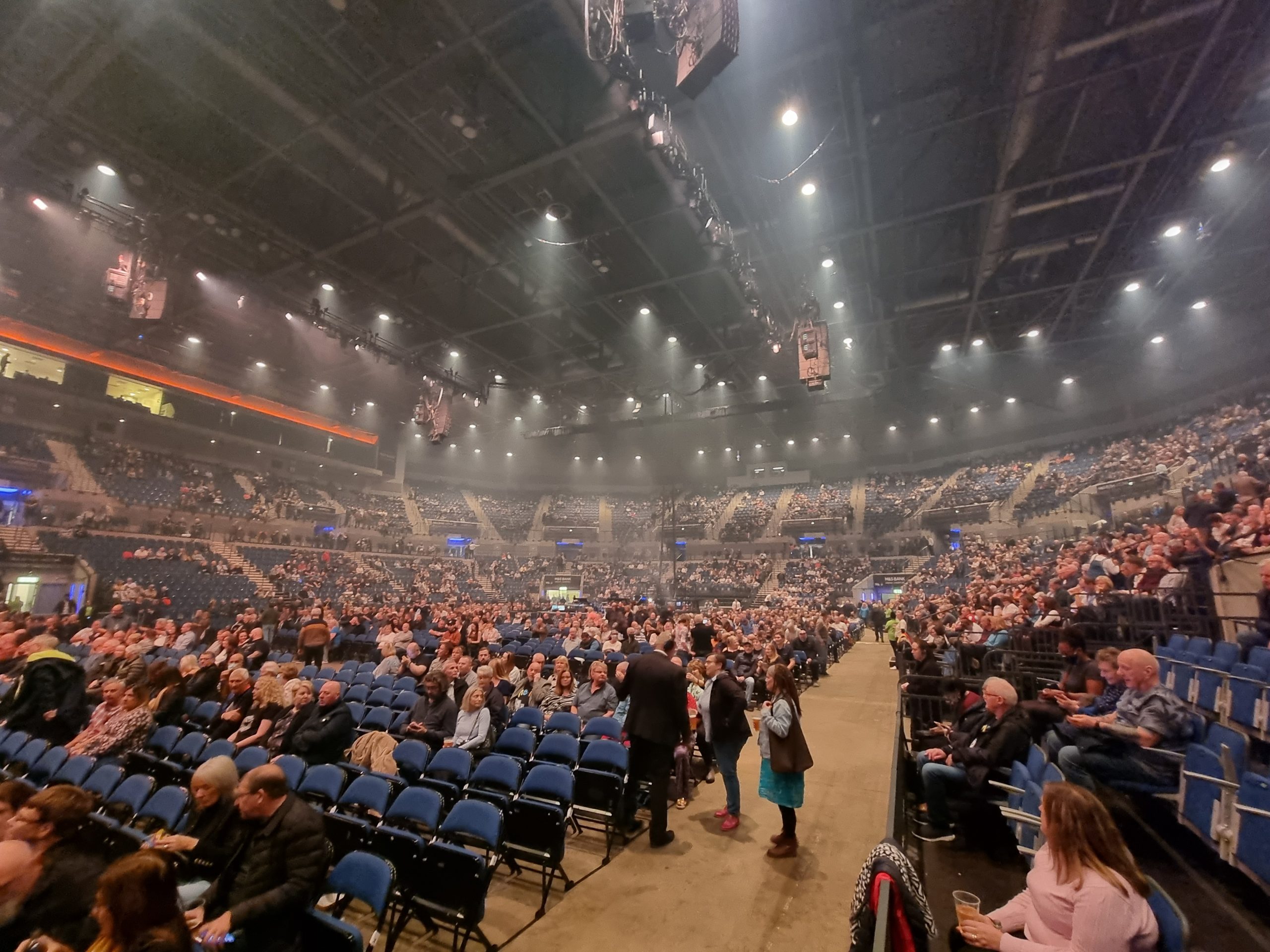 We had good seats, but we were at 90 degrees to the stage so we had a lot of twisting to do. But can’t complain too much about our slightly sore necks, and luckily we didn’t have any drunken 60-somethings too close to us on their feet standing up all the way through the gig.

I remember arena gigs from my youth – if you got on both feet, you were told to sit down immediately. None of that today. (I still didn’t get up).

There were a few drunks, possibly to do with the fact that Liverpool Arena prices are cheaper than Essex bar prices. £5 for a pint – I remember buying a pint at the London Arena in 1990 for £4.70! 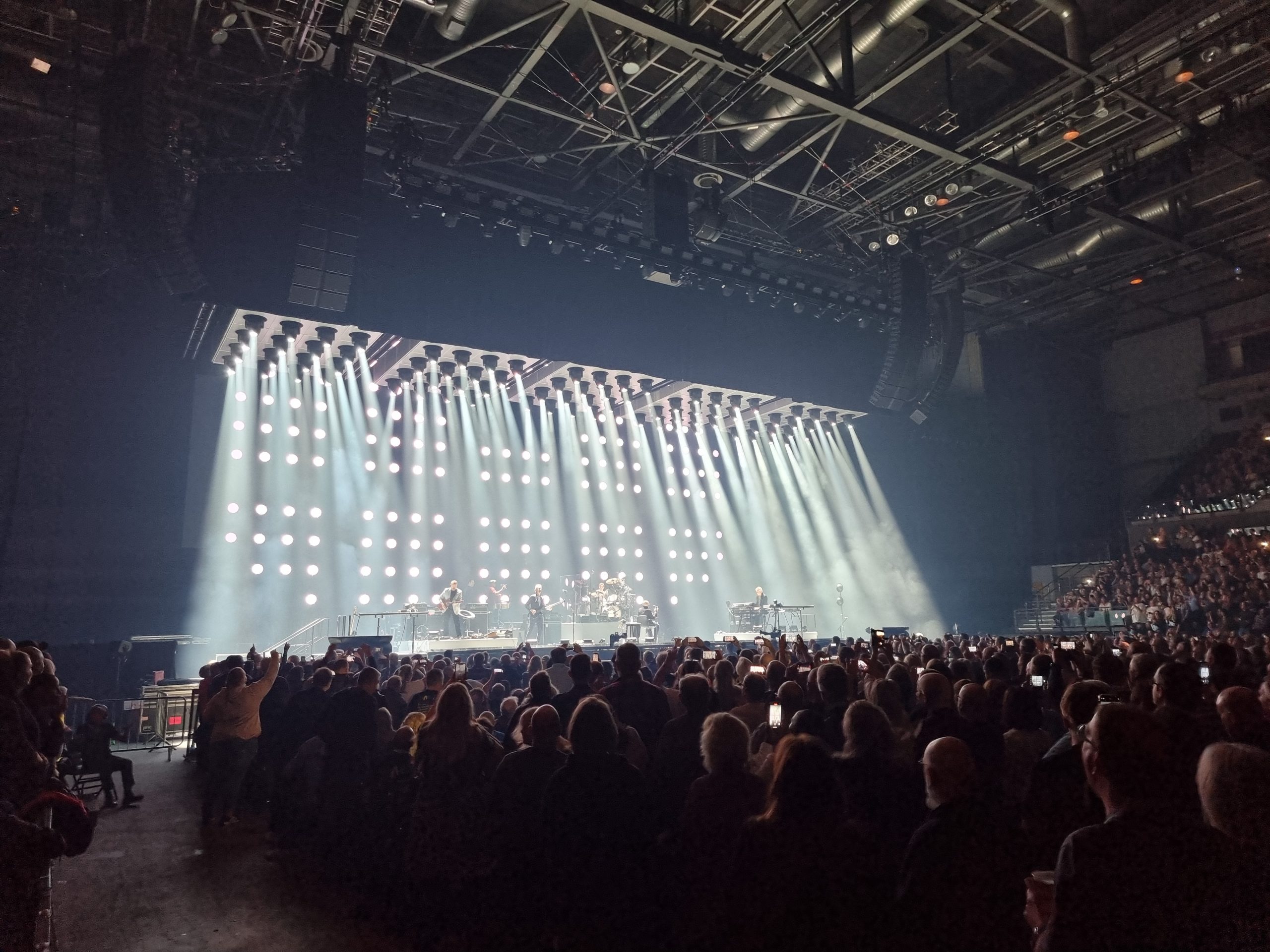 So yes, Genesis. Two and a half hour set, more oldies than I expected – they didn’t necessarily play all of the songs in the oldies, but it was still good to hear them. And even 33 seconds of Stagnation too, which was unexpected!

The musicianship was great – although Daryl Steurmer is still not quite as good as Steve Hackett.

There’s been a lot made of Phil Collins’ health and frailness. He’s been saying recently this will be the last Genesis tour – I’m astounded he’s even there at all. He doesn’t need the money, his voice is ailing (although it’s still there) but he still gave a great performance.

And this being Genesis, the light show was as good as I’ve seen at a gig for a long time. And the sound – perfect, so nice work, Liverpool! 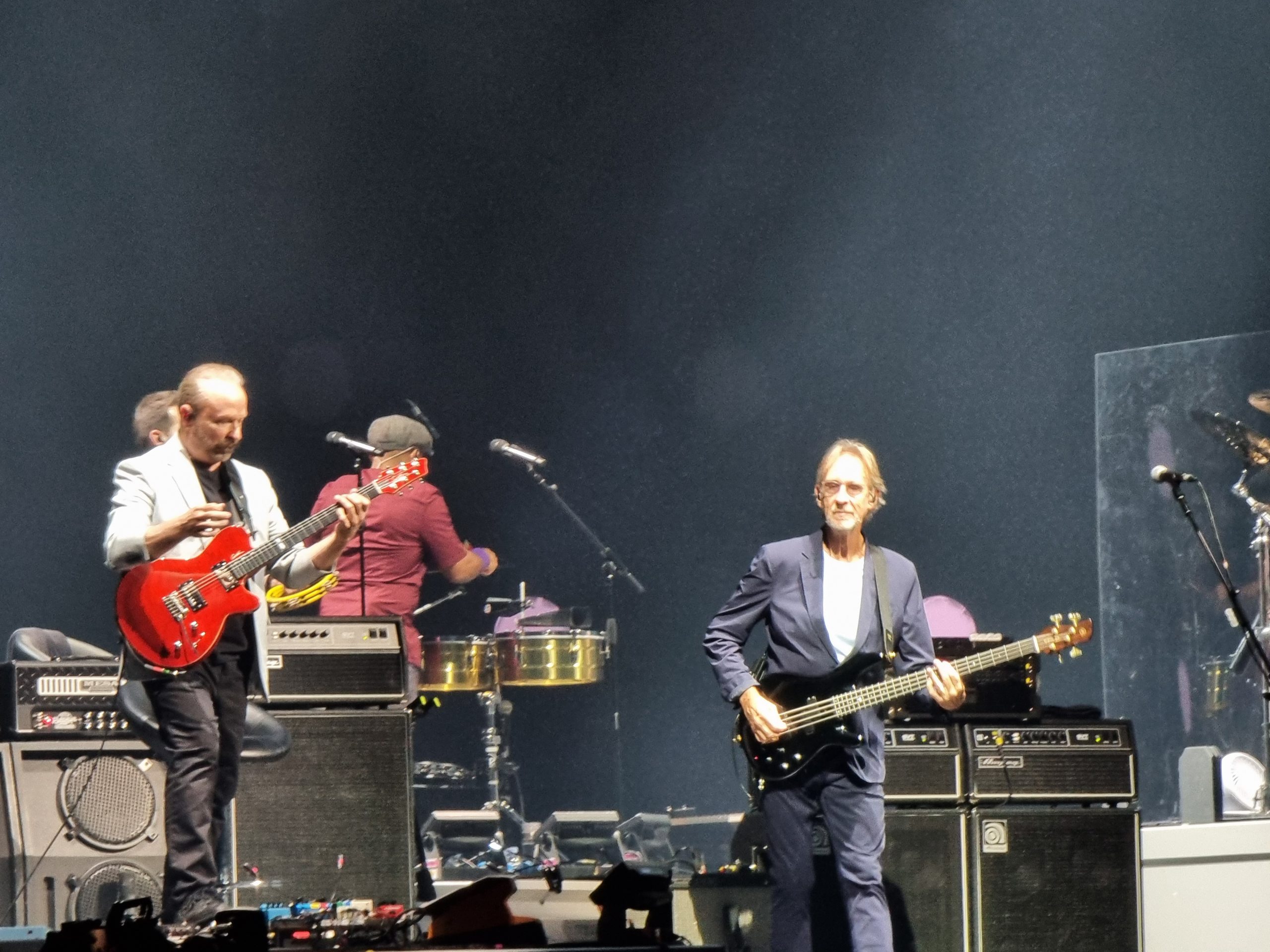 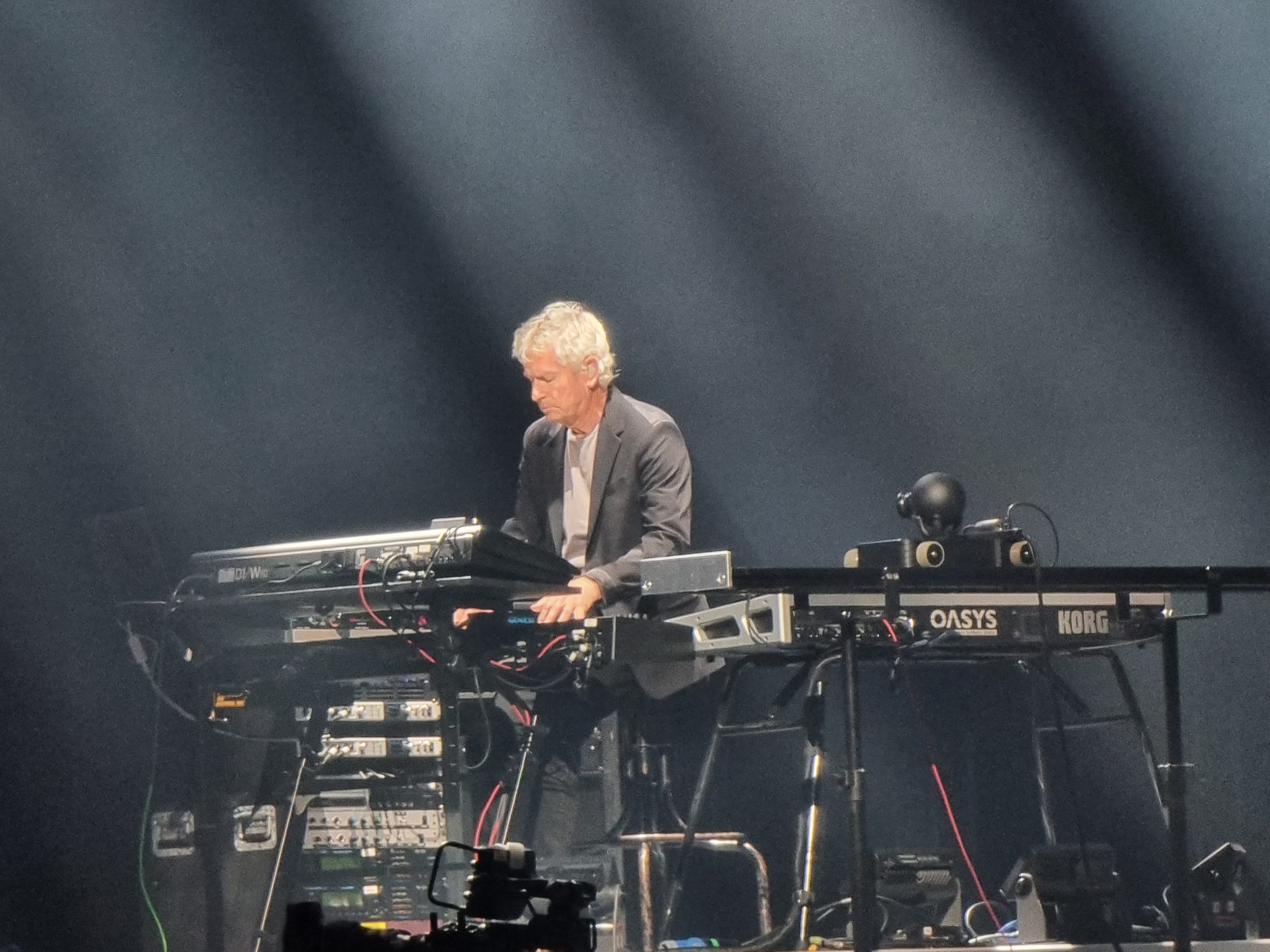 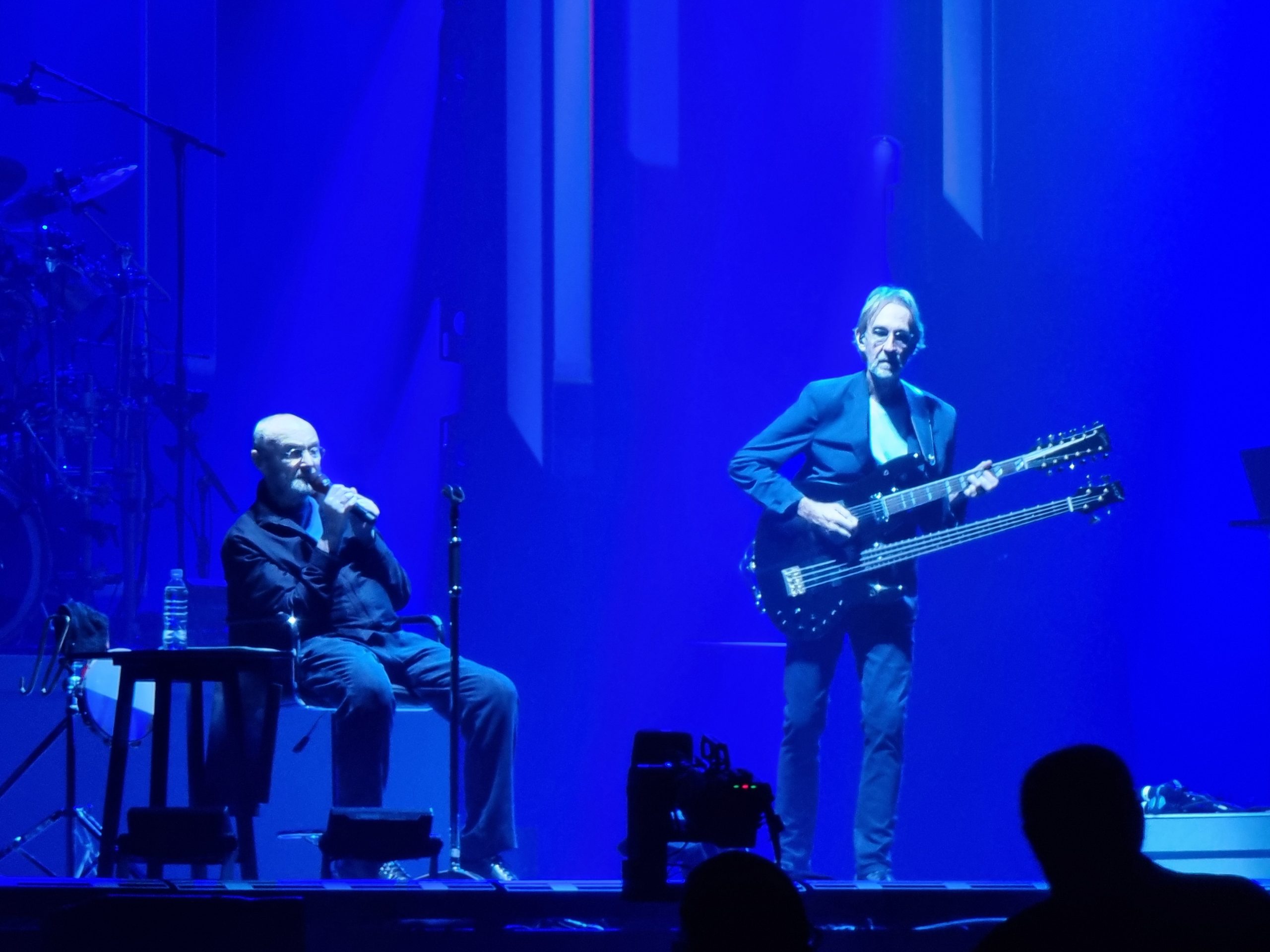 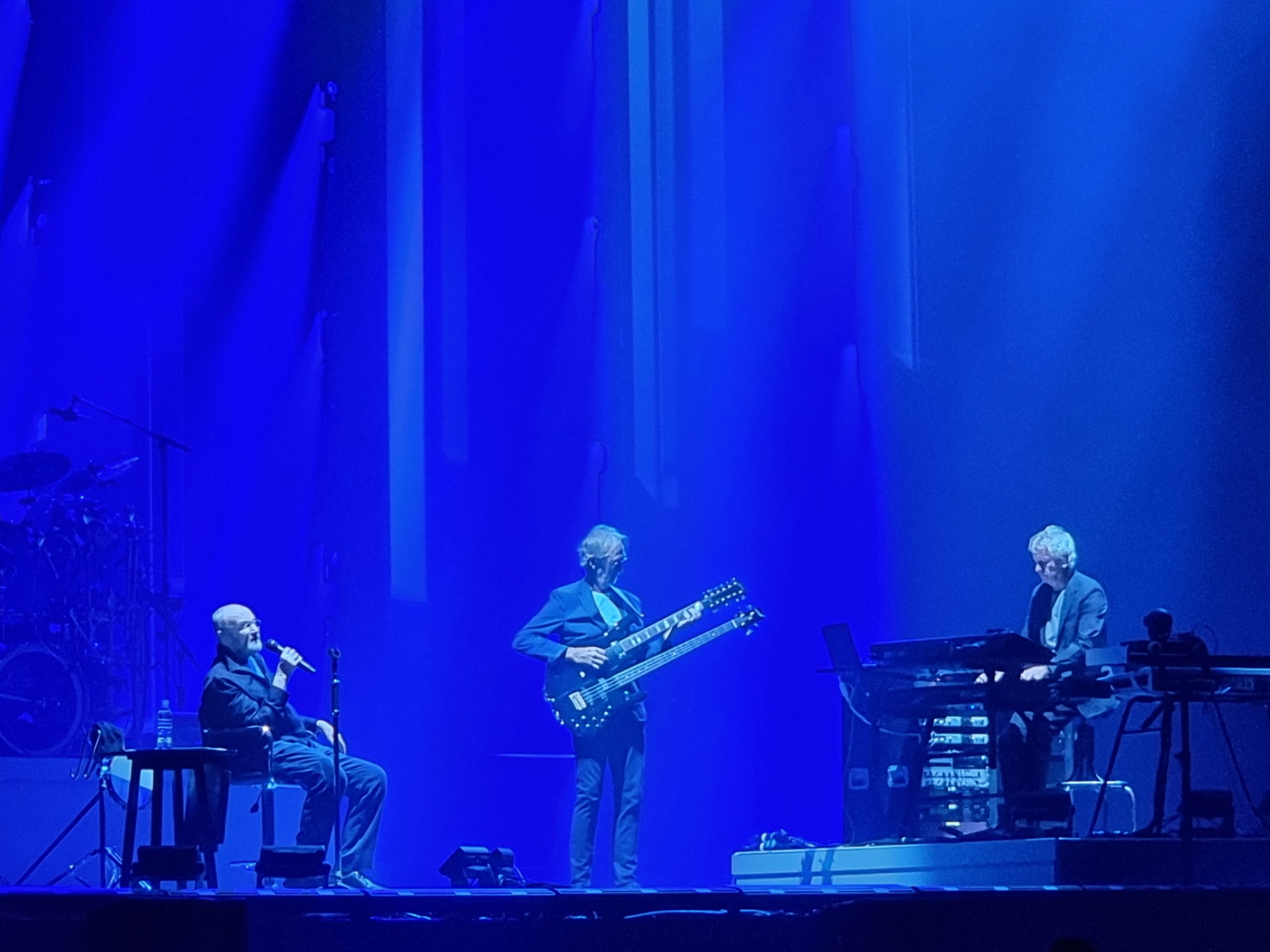 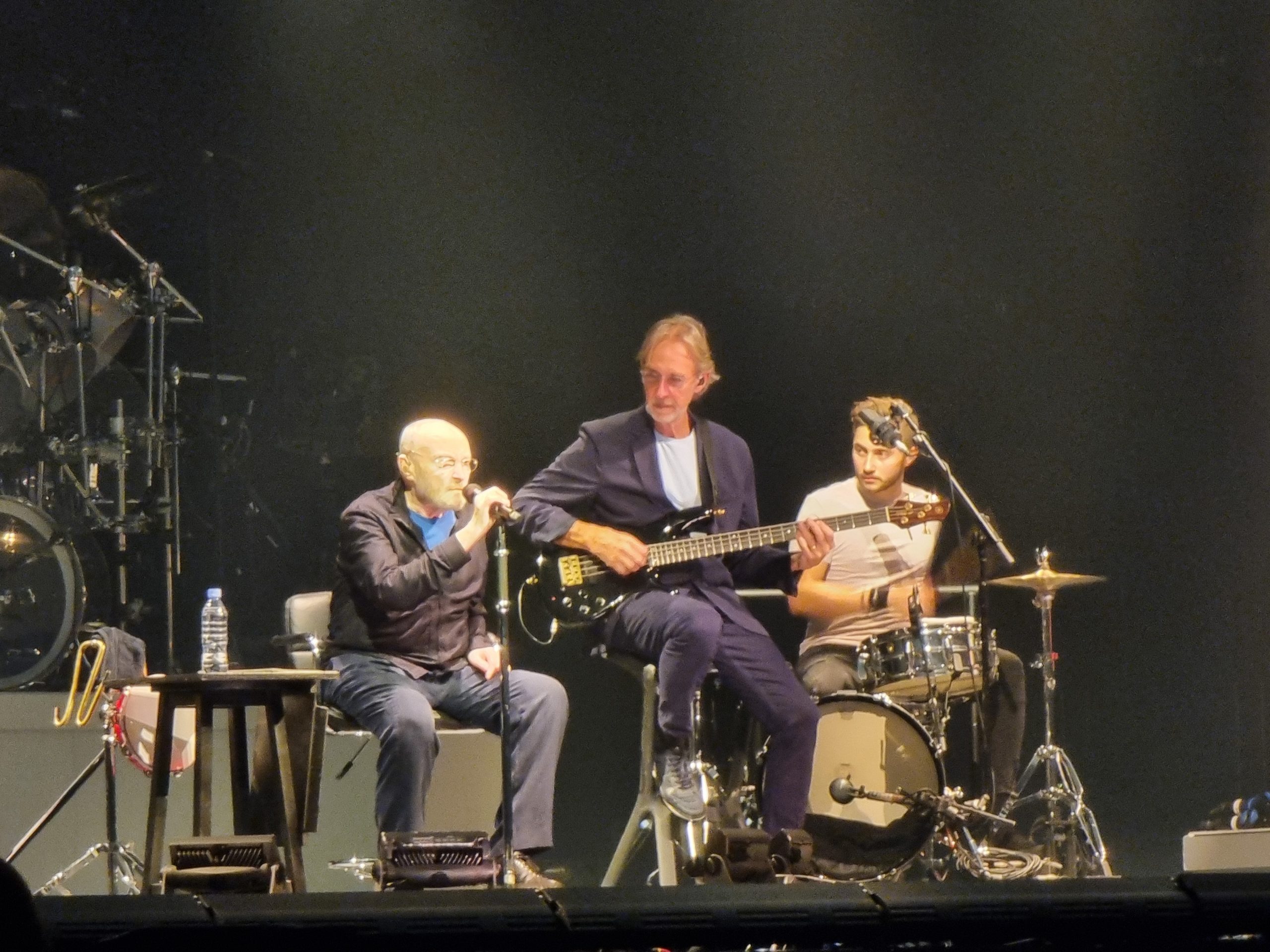 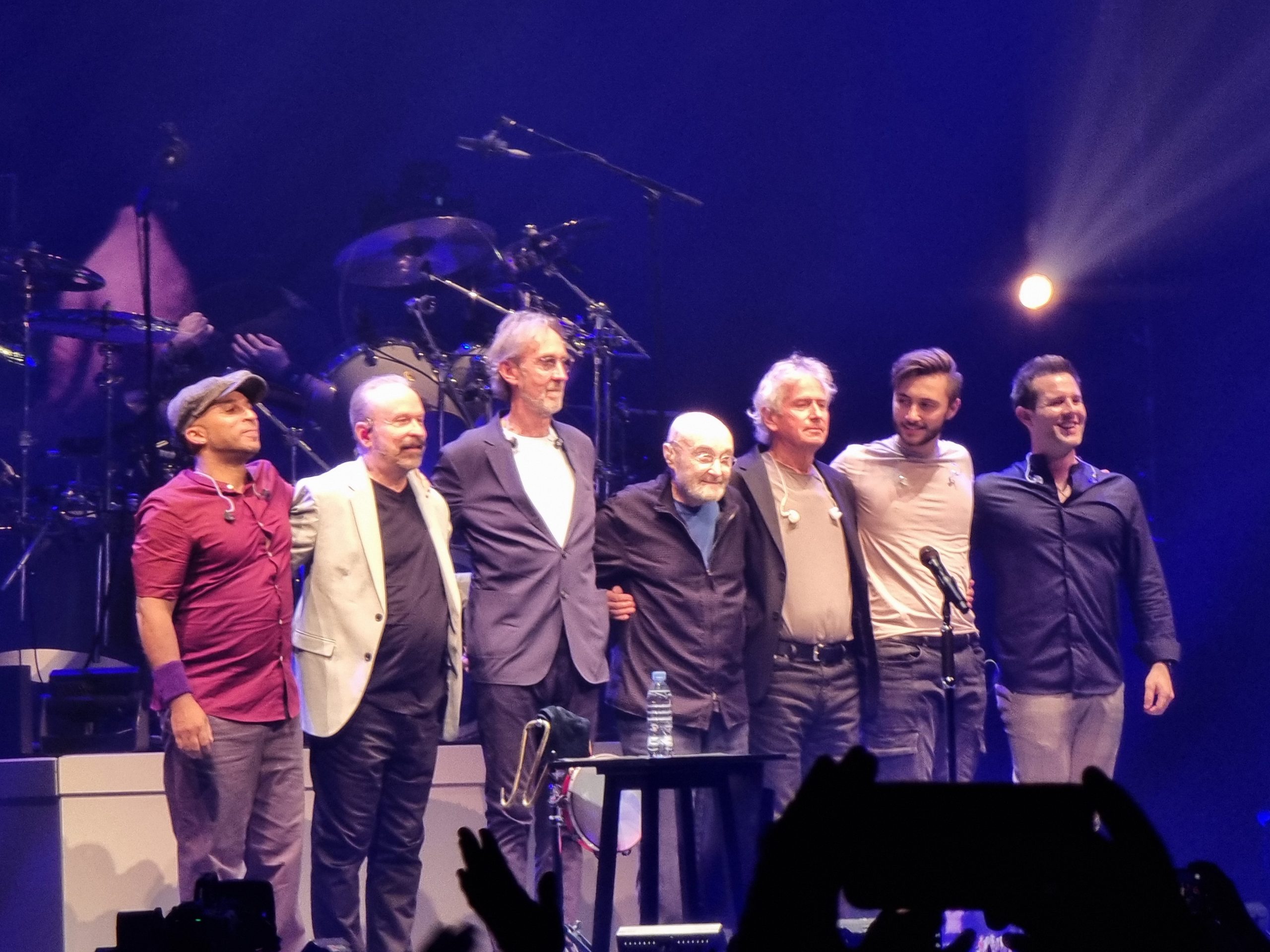 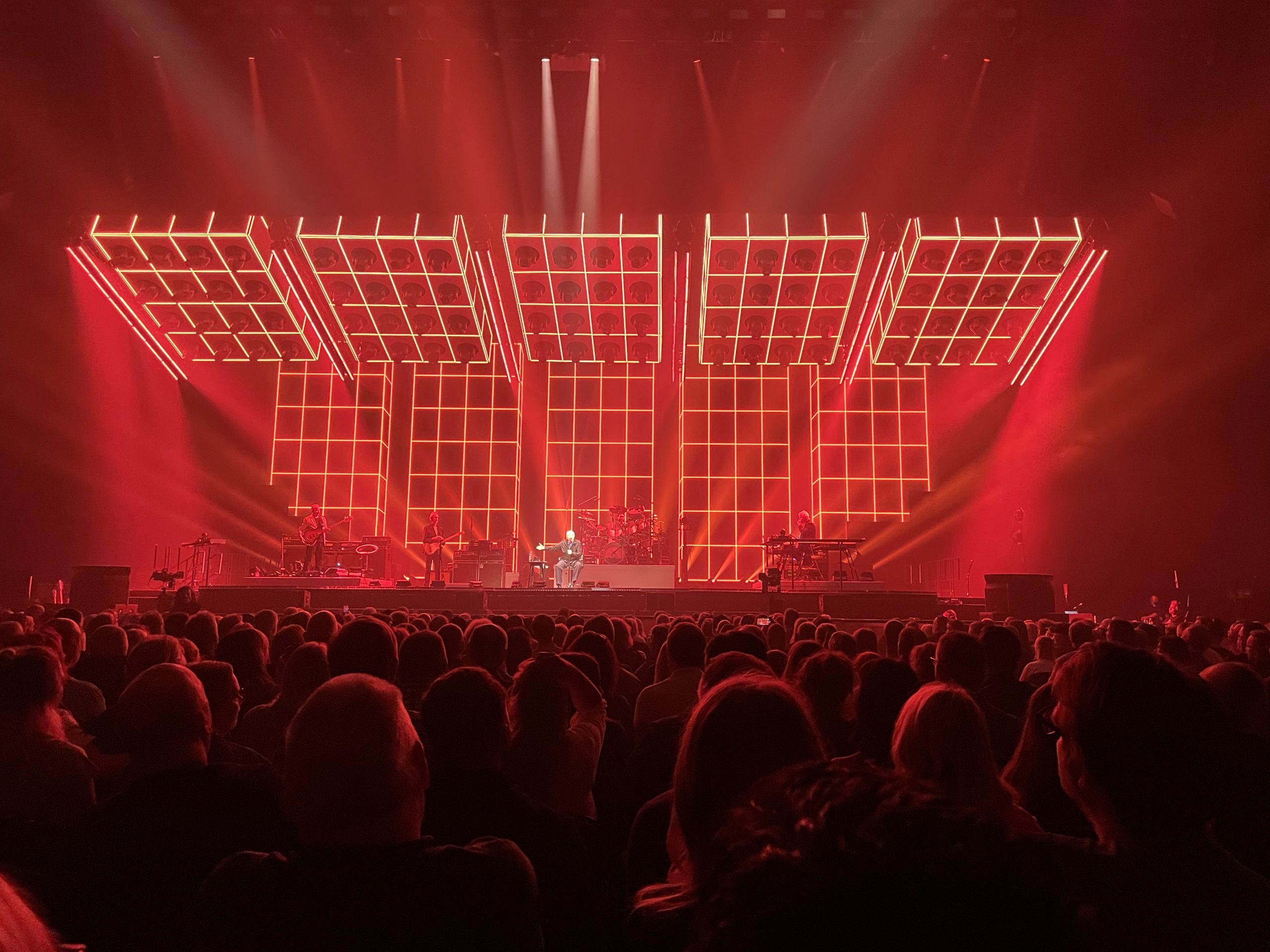 I didn’t take the last picture. But told you the lights were good!