I started the Red Penguin website in 2000 initially as an oline magazine with my friend John. I’ve still got the original website saved on my hard drive – but you won’t see any of my writings from back then on here now, as all of our reviews were snarky and sarcastic. We obviously fancied ourselves as an alternative to the NME and Melody Maker.

We never did achieve any “success” with it, although one of our articles about Napster went VIRAL IN NORWAY – it appeared in a newspaper there and we had thousands of hits from it, so many that at one point we put a big chunk of Norwegian text on the home page. But otherwise, it was just for fun. And we outlived the MM by a few decades, didn’t we?

After a year or so we got bored and he bailed out. I kept the Red Penguin name ever since to blog the stuff I don’t blog elsewhere. This Chumbawamba gig was the first review I put on the site.

I’d caught them live at V98 – I didn’t know much of their stuff apart from Tubthumping (of course), Timebomb and Enough Is Enough, but I thought they put on a really good set so we were happy to drag ourselves up to Cambridge to see them touring their new album WYSIWYG (no hits). Robb Johnson was good, although I didn’t see much of his set, as I spent most of the time queueing up at the bar behind someone trying to buy a round with his takings from the penny arcade.

The walk-on track was an instrumental where the band were voicing criticism that they’d received. Comments like “they call themselves anarchists, but they’ve just signed a major deal with EMI” and “they throw a bucket of water over a Labour minister, but the Tories were in for 18 years and you didn’t hear a word out of them”. Wait, they’ve got a point with that last one, haven’t they …

Alice Nutter looked great as a Bacardi-swilling nun and Danbert Nobacon looked great in a brick wall suit with big fat cigar. The songs they played didn’t include their second-biggest hit, Amnesia – or did we forget they played it? They did play Passenger List for Doomed Flight 1721, which as far as I can tell is basically a list of people they’d like to see die in a plane crash. They included Paolo Di Canio in the roll call, and as a West Ham fan I was appalled – although he did recently play for Sheffield Wednesday, and the band were based in Bradford, so maybe it’s a Northern thing?

I didn’t take any photos of the gig – but I nicked one from Chumba fansite Q25, which no longer exists but which used to reside at http://www.geocities.com/q-25.geo/. (GEOCITIES!) And here’s the pic, to prove that it really was on the internet in 2000: 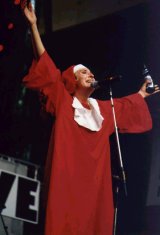 Other facts from this gig:

This article, like all of the gig articles here, is dated on the day of the gig itself – but I actually wrote it in 2022, from notes I made in 2000. And memories I am still clinging on to …